The representatives of the Freight Village Wilhelmshaven have recently expanded their relations with South Korea and China. During the 6th Busan International Port Conference in Busan at the beginning of November, the Sales Manager of Container Terminal Wilhelmshaven JadeWeserPort-Marketing GmbH & Co. KG, Ingo Meidinger, signed an agreement with the Busan Port Authority. The cooperation agreement aims to tighten the mutual exchange of information on the latest developments at both port locations, as well as strengthen economic relations. The location on the Jade has regular connections to Busan via scheduled services: AE5 (Maersk Line) and Albatross (MSC).
Ingo Meidinger also signed a cooperation agreement between Container Terminal Wilhelmshaven JadeWeserPort-Marketing GmbH & Co. KG and Shandong Leadingshine International Co. Ltd. (Lishang International) on 13 November in Munich in the presence of Bavaria’s acting Minister President, Hubert Aiwanger, during the Shandong – Bavaria Industry Cooperation Forum. Lishang International is headquartered in Weifang, Shandong Province, and is developing an online platform for the import and export of food and agricultural products.
A delegation with 25 members from industry and government from the Province of Gyeongnam, South Korea, headed by the ambassador of the province, Heo Jin, and the Chairman of the Economic Affairs Department of the province, Bang Moon-Kyu, visited the deep sea container terminal on 29 November. The province with 3.5 million inhabitants is located in the southeast of South Korea, and borders the Sea of Japan. The guests attended presentations on the Freight Village, the hinterland connections, and the availability of commercial plots, given by the Managing Director of Container Terminal Wilhelmshaven GmbH & Co. KG, Andreas Bullwinkel, and the Managing Director of EUROGATE Container Terminal Wilhelmshaven, Mikkel Andersen. At a subsequent tour of the terminal guided by Armin Hüser, Operation Manager EUROGATE, the visitors gained an insight into the modern handling processes with the world’s largest gantry cranes, and showed a great deal of interest in the opportunities opened up by the location for South Korean foreign trade activities.

The photo shows the delegation from South Korea with, from left to right, in the first row: 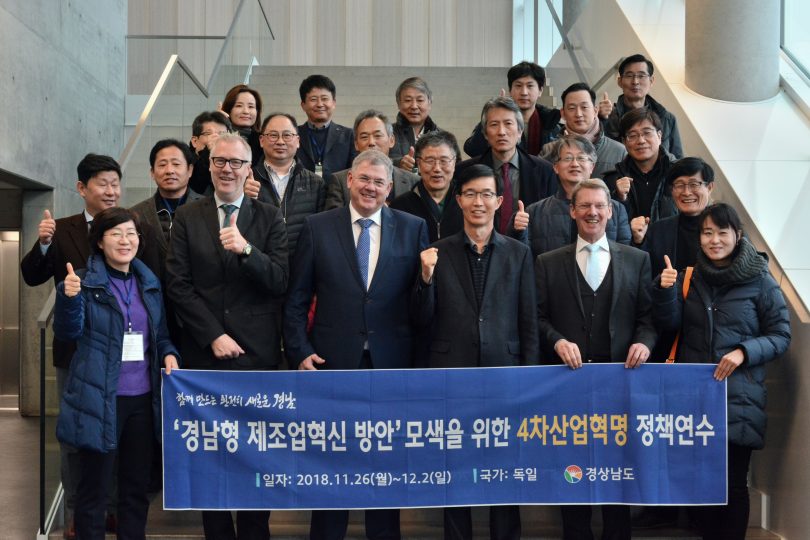