Schortens – NORDFROST has broken ground on a new development at its seaport terminal in the Freight Village Wilhelmshaven. This heralded the start of the sixth phase of construction on the 33 ha site in Germany’s only deep-water container terminal. It involves construction of a 10,000 m² drying hall and upgrading a 3.5 ha area for a container depot plus container repair workshop.

The heavy goods hall of the NORDFROST Seaport Terminal provided a fitting backdrop for this event with a number of invited guests from the local community. As has become tradition, they came together on 6 November in honour of the birthday of the company’s late founder Horst Bartels, who passed away in 2020. The hosts were his children, Dr. Falk Bartels and Britta Bartels, who seamlessly took over the running of the family business roughly two and a half years ago. It was also an opportunity to focus on the 10th anniversary of the NORDFROST Seaport Terminal and to mark upcoming construction projects with a ground-breaking ceremony.

The seaport terminal came into operation in July 2012 and has since seen tremendous development. Horst Bartels was convinced from the start of the value of the “textbook port” and was the first to locate to its logistics zone. Over five phases of construction and with investments totalling €210 m, the visionary business leader developed the NORDFROST Seaport Terminal to its current form. Beyond the company’s core business of deep-freeze logistics, the seaport has created an array of services for shipping agents from all sectors that are necessary for shipping services via the container terminal Wilhelmshaven. Today, roughly 300 people are employed at the NORDFROST Seaport Terminal in various logistics areas. They are responsible for the handling and storage of food products in all temperature classes, in addition to pharmaceuticals, non-food products and project transportation. These goals are achieved with the aid of 150,000 pallet spaces, multifunctional areas and an 8,000 m² heavy goods hall.

The comprehensive range of services additionally includes container stowage, seaworthy packaging and transport. To meet increases in demand resulting from the current positive development of the Container Terminal Wilhelmshaven, the company has decided to invest around €15 m in the further expansion of the logistics centre. Construction of the hall will commence at the start of the year. Just a few days after the ground-breaking ceremony, construction of the container depot, which is spread over two areas, began at the beginning of this week.

The Matthäi construction company will initially upgrade a 1.5 ha area in front of the existing building complex of the NORDFROST Seaport Terminal. This will be accessible from the motorway, taking the shortest route possible, and from the Eurogate Container Terminal (CTW) without normal road traffic weight restrictions. For providing electrical power, numerous reefer plugs will be installed for the intermediate storage of loaded refrigerated containers that are delivered ahead of schedule for shipping, for example. This area, which is linked to the company’s current operations and rail track, is scheduled for completion by the end of the first quarter of 2023.

A further 2 ha area should also be fully upgraded as a full-service container depot for heavy goods by January. This is situated further north on the 33 ha premises at the existing heavy goods hall and the rail line, or directly at the CTW, and is to be used mainly for the handling and storage of empty and full containers as well as for project services. The depot will boast a 1,200 m² container repair workshop and a container washing area. This sub-project, including the 10,000 m² drying hall, was planned and is being delivered by the Goldbeck construction company. The partially racked hall will be equipped with ramps and accessible for trucks. An office and breakout spaces for the employees working at the depot and dry storage facility are also planned. A solar system is to be installed on the roof. Commissioning of the new hall is planned for October 2023, with the depot ready for service at an earlier stage. 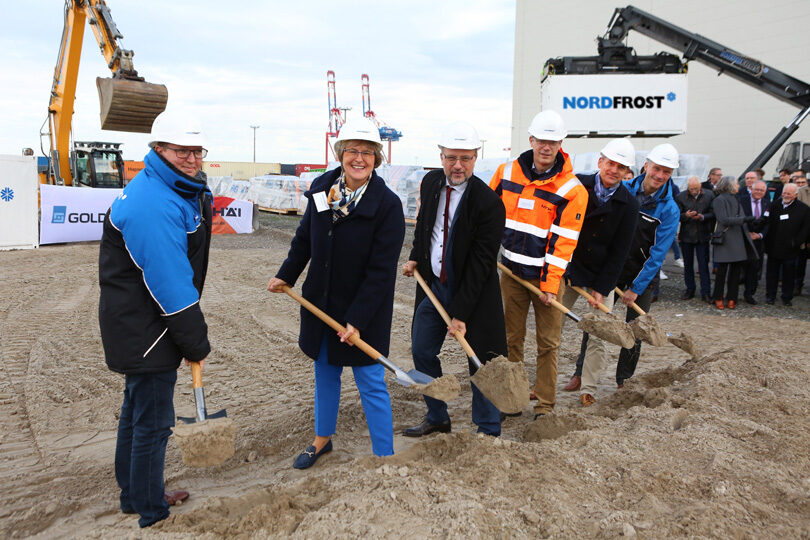